May 1976 - The Start Of The Lower Mainland Yacht Co-op

Frankie and I moved to White Rock from Northern B.C. and I fully expected to get an invention I had developed into a position where we could buy a sailboat, but it didn't turn out that way. Instead I found myself leaning on the rail of the old pier looking at the half dozen sailboats bobbing at the float and wondering how I was ever going to get sailing.

The desire to sail was harbored for over thirty years after I'd served in the Canadian Navy in World War II where I had the good fortune to be chosen as an instructor and got involved in seamanship and sailing. I wondered how many other people wanted to sail, but could not afford to so I called in on a printer friend, Terry Schmidt; because I knew he had sailed in Germany and knew that he, too, wanted to get on the water. We kicked around a few ideas of what kind of organization would be best and placed an ad on then brand new Shaw Cable, announcing a meeting for land-bound sailors. The number of people who turned up overwhelmed us. I remember thinking "Bingo, we've struck a nerve!" We took ten dollars from each of fifty people, started looking for a boat and I went to Victoria to register the organization and was steered to the Superintendent of Co-operatives.

We made a deal with a fellow who owned a trailerable McGregor 22, (which we named "Happy Ours") paid him a few dollars down, gave him a membership as part payment, (he never did sail) went to the bank and borrowed a couple of thousand dollars and, just like today, started looking for a bigger and better boat.

My wife and I were "keeper of the keys" for over 25 years and met every one who ever passed through the club. And we consider it an honour and a pleasure that we were able to do so. But it was the kind of person who was attracted to the club who really made it blossom and grow. I could mention dozens of people who devoted time and energy, as they still do today, and who are responsible for the steady growth and longevity of the organization. I savour the memories of them all and the many years of sailing and comradeship. It is to those pioneers I dedicate this information.

DECEMBER 20, 2018: The perfect storm struck White Rock. Our boats were well secured to the dock at the end of the pier. But combined high winds with a high tide allowed the waves to overcome the breakwater and eventually lift an entire section of the dock off its moorings, and with it our boats. In a matter of hours our entire fleet was completely destroyed. While surveying the damage of the beached hulls (see above photos), we noticed that some of our boats were still faithfully tied to the dock, right to the end! 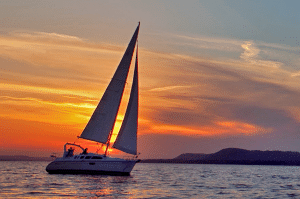 In early 2019 the co-op regrouped and, through the stalwart efforts of our members, quickly rebuilt our fleet up to the current 6 boats. The LMYC has now rebounded and will continue on to fulfill its mission of promoting affordable, safe and enjoyable recreational sailing.